I developed my first tarot spread recently, and I’m so excited about it that I wanted to share it with all of you! The following spread is based on the tale of Bluebeard, as told in Women Who Run With the Wolves by Clarissa Pinkola Estes.

For those unfamiliar with the tale, a young woman and her sisters are wooed by a rich nobleman. Her older sisters think the dude is creepy as fuck and reject his proposal. However, the young woman is blinded by the promises he offers and marries him.

Not long after they wed, he goes on a trip, giving her the keys to the castle. He tells her she can go into any of the rooms except one. Her sisters, who think this is weird, convince her to look for the forbidden room and turn the search into a game.

When she finds it, she discovers that her husband is a serial killer who has chopped off the heads of all of his former wives.

Stuff happens where, of course, he finds out that she found out and tries to kill her, but she is miraculously saved by some random brothers that come out of nowhere (really don’t get that part!)

Clarissa’s version is way better. In fact, it was so good that it inspired me to create this five-card spread for getting out of stuck situations. I’ve used it several times already and have found it to be one of my most direct and powerful spreads.

The layout is as follows:

Card 1—The Proposal: This is what the querent wanted and thought they were getting when they entered into the situation

Card 2—The Predator:  This card represents what is entrapping the querent currently. Although this could potentially be a person, the predator can also be a belief or situation.

Card 3—The Trick. This is what has been lost in the process of pursuing the proposal. The querent may already have some inclination of this loss but may be unable to see it because of the emotional investment in the proposal.

Card 5—The Key. This is what will give the querent the power to free themselves. It could be an action or it could be the new perspective that the querent needs in order to avoid repeating an unhealthy pattern.

If you read Tarot, give this spread a whirl and let me know what you think!

“If you’re right-handed, how often do you benefit from a right-handed world?” The speaker looked around the room as a few half-hearted answers trickled up from the crowd.

“If you’re left-handed,” she continued, “how often do you tweak to fit into a right-handed world?”

The illustration, though simple, was obvious. Right-handers are privileged; left-handers struggle with a world designed without them in mind. And even though there wasn’t a particular disadvantage I could identify within this illustration, I sat there fuming.

It may not matter on a practical level that ambidextrous people were completely overlooked, but it did matter on a philosophical level. The speaker was attempting to highlight privilege with a relatively innocuous illustration, and she inadvertently succeeded in highlighting what I think is the biggest issue surrounding the conversation of privilege currently.

Time and time again, invisible minorities don’t even make it onto the table.

Someone I know recently remarked, “If diversity were the Olympics, invisible minorities wouldn’t even be a team.”

So often it seems that oppression and privilege are approached like a competition. Whoever has the most visible disadvantage wins.

What happens to the invisible? The ones who don’t fit neatly into the accepted, clearly drawn lines between dichotomies of white/black, gay/straight, male/female, rich/poor, disabled/abled, or…as with the silly example above, right-hand/left-hand?

They get lost, ignored, erased, and denied.

It comes from “both” sides.

This year I’ve heard more about privilege than ever before. Initially I was ecstatic because it’s a conversation we desperately need to have as a nation.

But now I’m just burnt out.

I’m so tired of responding to a privilege question with “but what about…” I’m tired of being told I benefit by being erased or that my version of oppression doesn’t matter because I didn’t experience it within the accepted categories.

Someone can also pass without necessarily belonging to the privileged.

But when it comes down to the carry-out, awareness of multiple facets of identity rarely remains, much less awareness of the multiple expressions that a single facet can take.

More often than not, I watch privilege discussions degenerate into people vying for perspective king-of-the-mountain, and if that requires pretending that only two opponents exist, all the better. It’s easier to categorically deny someone’s experience if your world is black and white.

However, I don’t believe it’s possible to make progress in the conversation about privilege and oppression while we are ignoring the experiences and realities of anyone. That just creates new oppressions, one in which “both sides” participate together. If we truly want to fight oppression, prejudice, and discrimination, we need to address the co-oppression of the invisible minorities. We have to stop erasing those who don’t fit into our dichotomies of identity.

I know it’s threatening to think that the lines of identity aren’t as clearly drawn as we would like to think. I know it’s terrifying to realize that we might have something in common with the “other”/”not you” or that our experiences might be shared on various levels. I even know it’s confusing to consider how identity works if there are so many people that fit in the middle.

It’s uncomfortable to think about trying to navigate a world in which we can’t visually pigeonhole someone and know whether we trust them or like them or belong with them.

But then again, isn’t that what we’re supposed to be breaking away from anyway?

I’m not a fan of my birthday. Around this time of year I usually go into hibernation, snarling at anyone who reminds me of that approaching day.

I love my zodiac month, and I usually love the beginning of a new year for myself…but the day of my birth just isn’t up there on my list of things to celebrate.

Black for a life begun in sorrow. Red for the transforming fire of the Phoenix. White for the hope of the future.

It’s not that I don’t do things on my birthday. I have quite a few rituals that I’ve developed to mark that day. They just aren’t on the party spectrum because I consider my birthday a day for grief and mourning, a time to commemorate the beginning of a life of trauma.

It’s hard knowing that your mother didn’t want you—that she cried when she found out she was pregnant with you.

It’s hard knowing that someone you trusted molested you and that no one in your family paid attention to the warning signs.

It’s hard knowing that the first 20 years of your life were filled with lies, abuse, and pain.

It’s hard to celebrate the beginning of a life like that.

But I just can’t! It feels like trying to send a widow a card that says, “Congratulations!”

I don’t regret living. I love my life, and I celebrate it in many ways, including celebrating “unbirthdays” and “new years” before and after my actual birthday.

But the day of my birth?

That day I’ve reserved for funerial rituals and quietude.

In that way, my birthday is special. It’s a very sacred day for honoring what I’ve come through.

Celebrating is for the rest of June.

We’ve tried to sterilize, medicalize, and materialize human existence after centuries (or millenniums) of spirituality. We’ve buried our guides, forsaken our ceremonies, and detached ourselves from our process in exchange for diagnoses and medications.

Carl Jung believed that myth was

the primordial language natural to these psychic processes, and no intellectual formulation comes anywhere near the richness and expressiveness of mythical imagery.

In other words, the psyche speaks in myth, and science and psychology alone cannot begin to even touch the depth that mythology reaches for the soul.

I once thought that reclaiming my spiritual life was something I had to do for my healing because of my history within a cult, where so much of my abuse has been at the hands of religion; however, I don’t think I believe that anymore.

At an herbal conference a couple weeks ago, I attended a class about sacred herbs in spirituality. The teacher started the class by talking about tobacco and its use in various Native American spiritualties as a purifying herb. I was struck when she mused about the high rate of cigarette addiction in the United States, wondering whether it indicated that people were seeking a cleansing without realizing it.

The comment stuck out to me not because it was a light-bulb comment on its own, but because it came on the heels of several similar thoughts I’ve encountered in a wide variety of settings.

At another conference I attended, the speaker (Ron Coleman) was talking about how mental health crises sometimes resemble spiritual awakenings. In this instance, he was talking about the experience of hearing voices, which in mainstream society is seen as a sure sign of psychosis but which has often been a signal of spiritual encounters in other cultures.

By every indication, he himself was atheist, yet he was arguing against labeling spiritual experiences as mental illness…

Few in today’s society would try to argue that exorcisms, witch hunts, and tortures that developed in response to unacceptable experiences were good; however, what options do we, as a society, offer people for their modern “unacceptable” experiences? Illness labels and medicinally exorcising fictional demons?

On some levels, I think we might offer even fewer opportunities for people to confront their experiences and find a way to work through them to a positive end, perhaps not because we think they are demonic, but because we can’t handle the discomfort of not being able to control their process.

Maybe we’re not meant to.

“The cave you fear to enter holds the treasure that you seek.” -Joseph Campbell. Found over at quoteswave.com

Ron Coleman described the “proper” role of psychotherapists as midwives of the soul. It’s a radical perspective, but not a new one. Carl Jung, Joseph Campbell, Clarissa Pinkola Estes, and so many others have proposed many times over that the psyche doesn’t necessarily need fixing. It needs to find itself again. It needs to take its mythic journey, delve into its spiritual encounters…go into the dark cave. 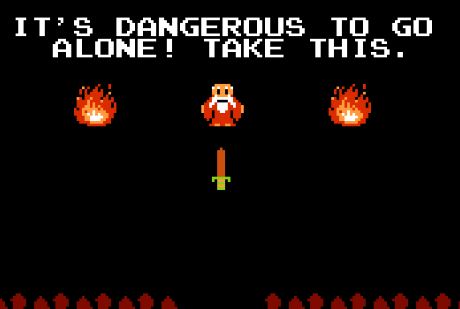 Zelda, that is all. Found at zeldauniverse.net