This wasn’t my first time voting, but in many ways it was. In the past, I voted who I was told to vote for. I didn’t dare think outside the box because I was terrified of what might happen. The few people who were brave enough to openly support Obama at Bob Jones University were looked down on and ostracized by their fellow students, and I’ll admit that I was one of the students ostracizing those brave souls. Between the peer pressure and the terror stories told by the preachers about what would happen to America if we didn’t vote her back to fundamentalist principles, there never seemed any other option. I voted blindly. I voted fearfully.

This time around, there was a similar fear, but on the opposite end of the spectrum. As I watched the consistent attempts to whittle down women’s rights and listened to the rhetoric that made me feel like I had entered an alternative universe, I felt like, once again, I had no choice. Even though I was unhappy with Obama for having extended the Patriot Act and concerned with the potential ramifications of H.R. 347—even though I was dumbfounded by the fact that both were almost unanimously passed through Congress—I still felt like I was being forced to vote out of fear of what might happen if a Republican won . . . until I discovered that there were more than two choices.

People told me it was a wasted vote. They told me that “third parties” never won and that the two-party system was just the way it was. They told me their own disappointed stories of having voted for third-parties and nothing coming of it. They said the United States had been that way since its birth and wouldn’t change.

But I decided that I wasn’t comfortable just letting it go and voting what I was told. I looked into each candidate. I thought I would probably come back to Obama because he would still seem like the best choice, but it gave me comfort to feel like I was making an informed choice.

To my consternation, I found myself falling in love with Jill Stein and the Green New Deal. I fell in love with her stand for freedom, her refusal to take corporate money, and her unflinching honesty about topics that the Democrats and Republicans were staying as far away from as possible.

Still, I heard that voice whispering that I needed to vote for Obama . . . or else.

But nothing good could happen if I voted out of fear.

Both Democrats and Republicans have betrayed freedom, in my mind, by passing legislation that attacked various rights. I definitely think Republicans have made more obvious attacks, but they both made attacks. Voting out of fear would just mean I was making a choice between which rights I was willing to forego. Was I willing to overlook my right to privacy in order to vote to have my right to choose? Were my rights as a bisexual worth more than my right to protest, to freedom of speech, or to due process?

I don’t think I should be having to weigh which rights I’m willing to take a hit on. Talk about wasting a vote! Voting for someone I don’t believe in because I am too scared not to is a wasted vote!

Eleanor Roosevelt is famous for saying, “No one can make you feel inferior without your consent.” I’ve been thinking about that statement and the personal power it implies all afternoon, and I think she was onto something much deeper than just feeling bad or good about oneself.

I hear so many people complaining about the way the elections are functioning and expressing dissatisfaction in the lack of choices, and the infuriating part is that we are the ones locking ourselves into this because we too scared of what might happen if we step outside of the box we’ve put around ourselves.

But isn’t that what I left fundamentalism to escape? A life controlled by fear isn’t what I want. My power is my own. I will not give it up by believing that it can be taken away.

Today, for the first time, I voted for the candidate who I felt represented freedom the most.

For the first time, I feel like my vote actually counted because it wasn’t a tool in someone else’s hands; it was the clear and unequivocal exercise of my right to express how I want government to function.

I can’t even express how excited and proud I was to walk into that booth and know that I was making my own choice. I dream of a day when we can all recognize the tremendous power of change that we possess and stop this silly business of voting the party line out of fear. 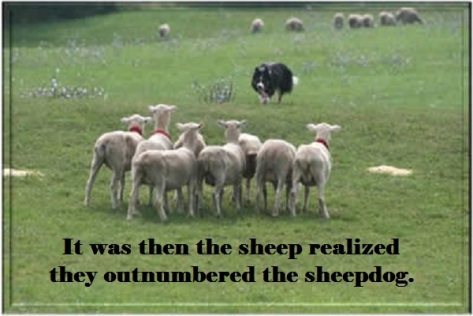