“You’re not wrong, but you are incorrect.”

This phrase, cheekily spoken by my friend, sums up about how I’ve been feeling the last few weeks as I’ve encountered a surprising number of logical fallacies in one of my textbooks.

Logic is important to me. I spent too much time learning to recognize illogic in my former beliefs and struggling to reconcile the cognitive dissonance of being told to believe two contradictory ideas to merely shrug my shoulders when I encounter it elsewhere.

I try not to harass people too much if their personal beliefs and conversations fail to match up logically…usually; however, I expect more from a textbook that is supposed to be teaching me the art of making ethical decisions.

Ultimately, it probably won’t make a big difference in the grand scheme of the universe for me to write this post. It’s not like my textbook authors will read my blog and think, “Oh, shit, she’s right! Logic is super important. Let’s recall all the books and rewrite them.”

However, there’s value in catharsis (which I didn’t need a textbook to tell me), and there’s also the chance that maybe someone will read this and take it to heart. Butterfly wings and hurricanes and all that, right?

So, what is logic? Why is it important?

Logic is the road that connects ideas together. It’s not so much a philosophy on its own (although there is a philosophical study on logic) as it is the glue that binds any type of reasoning together.

We all use it on a pretty daily basis without thinking about it. Every time you choose not to step in front of a car because you realize that it will likely hit you and injure you, you’re using logic.

Some logical lines of reasoning are so easy that you don’t really need to think them through because you’ve done so many times before. Metaphorically speaking, you don’t pull your GPS out every time you have to run to the grocery store because you already know the route.

However, what if you want to go on a longer mental road trip, so to speak? That’s where logical reasoning is very important. You could, for instance, drive from New York to Virginia on I-95. You will need to have a map, know where you’re trying to go, and pay attention to the route and signs along the way so that you don’t get lost, but you can get there because I-95 connects both states.

Logic is the road you travel on.

It doesn’t tell you where you should go. It has absolutely no value judgment on your starting place or ending place. It merely tells you whether you can get from point A to point B.

Of course, this is a very simplistic illustration, but I hope you get the idea.

Logic is necessary for everything from building a hypothesis to designing a car to solving crimes. Being illogical doesn’t necessarily mean that the conclusion is wrong, but it does mean that the process is incorrect and that any conclusions drawn from that process are suspect. A doctor could, for instance, accidentally stumble upon the cure for a disease by making a couple of errors in the treatment, but that doesn’t mean he developed the cure any more than a child who guesses correctly on a math test has “solved” a problem.

And I hope we would all cringe to think of that doctor proceeding to teach his “cure” to students without actually figuring out or understanding what it was that worked so well.

So you see, logic is imperative, not only on an individual level to know that something makes sense, but also on a societal or educational level to ensure that valid principles are being passed on. Logic is the first reality check: “Is this possible?” “Does this make sense?” It has to pass before “Is this true?” or “Is this good?” can be answered.

Since I’m out of town this weekend enjoying an herbal conference, being all hippie and magical, my partner has written a guest post. I’ve wanted him to post about some logical fallacies since I allude to them frequently but don’t always do a great job of explaining what they are. Last week I mentioned the “No True Scotsman” fallacy. This week, he has chosen to expound on that topic a bit more. Enjoy! I’ll be back with lots to talk about next week!

As humans, we find it easy to align ourselves with those we admire and distance ourselves from those we find repulsive. At stake are our reputations; we know that we will, inevitably, be linked in the public’s mind to those who are similar to us or hold the same label. Observably, the public scene, whether political, social or religious, feeds on poisoning as many wells as it can. If a lawyer mentions his occupation at the dinner table, his audience will likely lump him in with shyster lawyers, about whom derogatory jokes abound. If a politician uses the term “libertarian” to describe herself, she will swiftly be attacked by the news based on Ron Paul’s or Rand Paul’s list of beliefs regardless of her own personal stances. If someone takes the label “Christian,” his link to Hitler by Hitler’s avowed association with Christianity will haunt the poor bastard’s religious discourse for years to come, nullifying his claims that Christianity is a peaceful religion. And inevitably, when confronted with Hitler’s Christianity, many Christians immediately respond that Hitler was obviously not a true Christian. Upon hearing this, an astute opposition replies that the Christian has committed the No True Scotsman fallacy, which quite often sends the Christian into hysterical histrionics.

NTS contains a couple different fallacies. Macgregor equivocates as he subtly changes the definition of “Scotsman” halfway through the conversation. Whereas “Scotsman” refers to an ethnic group of people born in a certain region or possessing citizenship to that region, Macgregor implies that drinking plain tea is an essential part of being a Scotsman. Also, Macgregor proves his premise (that no true Scotsman drinks tea with cream) by concluding that no true Scotsman drinks tea with cream—a prime example of begging the question, which is a subspecies of circular reasoning.

Christians blatantly employ NTS fallacy as a buffer against association with other Christians with whom they disagree in doctrine, dogma or actions. Many Christians argue that “the effort to justify a mother taking the life of her unborn child is the absolute contradiction of Christianity.” The Facebook group called The Christian Left routinely characterizes conservative Christians as not Christian at all and having “nothing whatsoever to do with Christ.” Rick Santorum, a 2012 presidential candidate for the Republican party, argued that anyone disagreeing with him regarding Islam is part of “the American left who hates Christendom…they hate Western civilization at the core. That’s the problem.”

Intriguingly enough, both conservative and liberal Christians employ similar defenses when caught employing NTS fallacy. Both claim Jesus’ words in Matthew 7, where he says that people will be known “by their fruits.” They imply that the opposition’s lifestyle, beliefs and actions are such that no true Christian would embrace. Most of these Christians aren’t consciously trying to equivocate or beg the question (well, some are definitely trying and succeeding). The main intellectual problem is the premise.

When asked, some Christians argue that a “Christian” is a person who has faith in God, is saved, or is headed for heaven. But most Christians claim these, as do persons of multitudinous other faiths that Christians would likely exclude from Christianity. Narrowing Christianity to those who follow Jesus is no help either, for it seems many people of other religions respect and follow Jesus and his teachings better than many Christians, all of whom claim Jesus for themselves. Jesus, as a figurehead for Christianity, has also been appropriated to represent America, with both liberal and conservative Christians vying for this dubious honor. Funny thing: it turns out “Jesus” has as many definitions as “Christian” does. 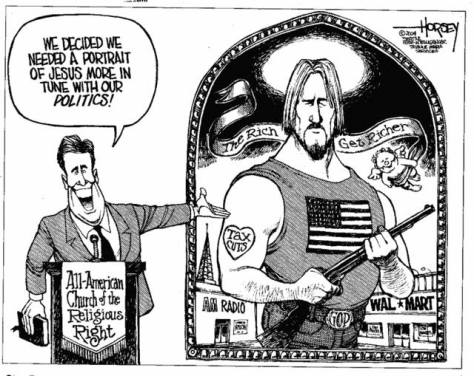 At this point, many Christians retreat to the idea that being a Christian means you believe the Bible is the word of God. However, Hitler also claimed this, as do Christians who support abortion, socialism, and other things conservative Christians find unchristian. Many Christians change their definition of “Christian” so many times during one conversation that one must wonder whether they even know what they believe or are simply regurgitating the countless contradictory definitions they’ve heard from years of numerous preachers’ ramblings.

Defending himself and Christianity against accusations of NTS fallacy, Thomas Shirk argues that “‘Christian’ is a label referring to religious and philosophical beliefs being held by the believer.  Since Hitler’s actions, words, and expressed philosophies and professed beliefs are outside of, and in many cases contrary to, the belief set of Christianity, it is…valid to say that Hitler was not a Christian.”

But Shirk has simply staved off the inevitable. He argues that no true Christian deviates from the Christian belief set; Hitler deviated; therefore Hitler is no true Christian. That’s all well and good, except that Shirk neglects to tell us what exactly the “Christian belief set” entails. We are left to assume that anyone who disagrees with Shirk is unchristian and that therefore “Christianity” equals whatever Thomas Shirk says it does. Conveniently, Shirk defines a Christian is one who believes what Christians believe, effectively equating the two ideas. Sure, Shirk avoids NTS fallacy. But in doing so, he employs ambiguous circular reasoning and fallacious ad hoc to avoid the question.

Probably the most controversial, current example claims a category unto itself: the Westboro Baptist Church of Topeka, KS. They embody all of the above definitions of “Christian,” yet both liberal and conservative Christians unite to levy NTS fallacy against them with reckless abandon. Westboro are Baptists and Calvinistic. They believe in God, Jesus’ deity and humanity, biblical salvation, biblical authority, and almost every belief which conservative Christians hold most dear.

And guess what? Westboro Baptist Church are Christians. Get over it. As long as no one is arguing that a position or belief is invalid because Westboro or Hitler believed it, Guilt by Association fallacy is not present. A religion’s history is a valid discussion topic in determining its constituents’ beliefs (past and present), its likelihood for violence, or its prominence in public society and government.

Many Christians search for a painless escape as they employ No True Scotsman fallacy to avoid uncomfortable associations with Christians they find abhorrent. However, the importance of delving deep into the definition of Christianity should not be sidestepped in favor of lazy intellectual security. As Bertrand Russell opined, “in all affairs it’s a healthy thing now and then to hang a question mark on the things you have long taken for granted.” Instead of employing fallacies to avoid discussion, talk about the differences in your Christianity from that of Hitler or Westboro. Honest dialogue will open you and your opponents to friendship, common ground, genuine disagreement without malice, and a healthy atmosphere that will affect everyone for the better.