I’ve developed an interest in watercolor painting recently and have started a project of creating mantra cards for myself. I’m hoping to have a deck about the size of a small oracle deck when I’m done, but it won’t be for a while yet.

Trying to decide what quote or message to put on the cards as well as what to paint on them is an overwhelming undertaking for someone who is a perfectionist.

To help ease the pressure I placed myself under as soon as I settled on this idea and bought supplies, I have chosen to paint only one a month–probably on the new moon as part of the inner reflection of that time.

The first I created was in honor of my grief, a blue card with spidery script and rain splatters. 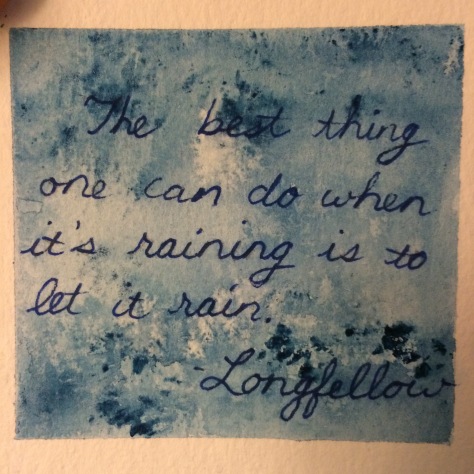 “The best thing one can do when it is raining is to let it rain.” -Longfellow.

It reminds me of the importance of sadness, the futility of resisting my own process, and the beauty of surrendering to it.

This new moon, I was feeling the need to validate both my body and my sexuality. While being slut-shamed by my doctor, fighting imbalances in my body, and seeking to recover my confidence of being worthy of love and pleasure, I needed something that would be body-positive. I pained a torso of a woman in a sheer scarf and selected a quote by Lenore Kandel. 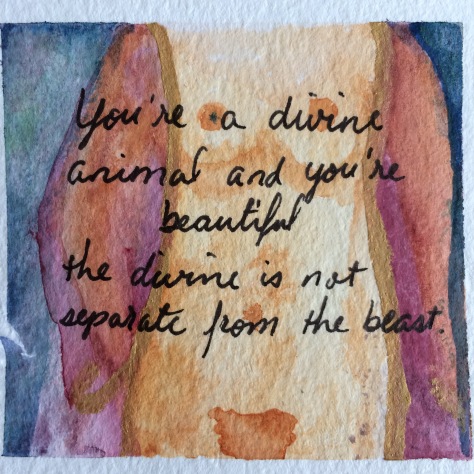 “You’re a divine animal and you’re beuatiful the divine is not separate from the beast.” -Lenore Kandel

I liked this quote in particular because it doesn’t seek to deny either the body and its humanness or the divine and its sacredness. It reminds me I don’t have to be flawless in order to love my body and celebrate my sexuality. In fact, the flaws are part of the package. They are not to be overlooked but rather to be celebrated as part of the whole. That holds true for subjective flaws like, “my stomach looks weird!” to susceptibility to infections and complications.

At first, I thought the process would be fun but that the meditation portion of what the mantra cards were for would come afterwords. As I built a collection, I envisioned myself shuffling them and drawing one out to focus on at various times.

What I discovered, though, was that the very process of creating the cards was a meditation in itself, requiring me to tap into the feeling behind the quote to understand what the picture should be, and then to further focus on the quote itself as I wrote it out.

I’m a beginner with watercolors, so there was also a certain amount of uncertainty and experimentation, allowing for flaws in my own work as well as trusting my intuition from time to time. Both seemed as important a part of this sacred process as the creation aspect itself.

I don’t know what I will be painting in the future. I find that trying to plan ahead which quotes or ideas I will explore decreases the power of what I’m trying to create. I prefer to wait for the message to come to me when and as it is needed each month.