There’s a myth in inspirational circles that success comes through determination to never give up.

“The night is always darkest before the dawn.”

“It’s the last key on the ring that opens the door.”

We’ve all seen the posters and memes. And I’m sure that we can all think of moments when they were true—when tying that knot at the end of our rope was the best thing we could do, when trying just one more time allowed us to make a breakthrough.

But I think it’s also important to recognize that quitting is not a bad thing. Giving up doesn’t show weakness or lack of dedication.

Every success is accompanied not only by failure and mistakes but also by the discernment of learning when to walk away.

If I never learned how to quit the projects that weren’t going to succeed or walk away from the situations in which I couldn’t thrive, no amount of inspirational posters with little kittens dangling from a branch would be able to help me. 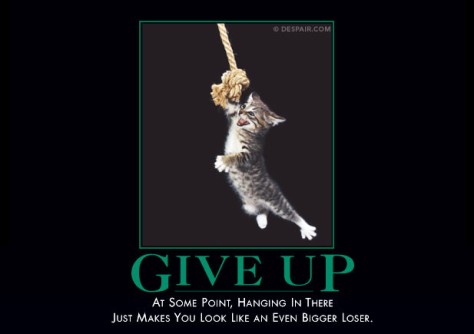 Give Up poster from Despair.com

We don’t celebrate the courage it takes to quit as a society. We assume that anyone who quits was just too weak to stick it out, but quitting takes strength. It takes confidence and self-respect. It takes hope that something better will come along. It takes bravery to face the unknown.

Quitting can be a fucking powerful, radical act in authentic living.

I want to see us own that!

I invite all of my readers to post their “success” stories of quitting in the comments.